While powerful regulated box mods and advanced sub-ohm clearomizers with all the bells and whistles continue to conquer the hearts of many vapers, some people, especially beginners in the electronic cigarette scene, seek for more straightforward and less complicated options. Yet some of them still crave for gigantic clouds of vapor which the low-end entry-level kits are not able to produce.

Eleaf, the manufacturer of the hugely popular iStick mods, has a product which matches this description – the Eleaf iJust 2 Starter Kit. Let’s find out how does it perform and what exactly to expect from it! 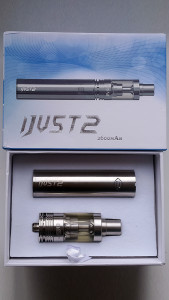 At first, as we couldn’t stop thinking about the ridiculously low price of this setup, we really didn’t expect much of it. The idea of a sub-ohm starter kit for $25 was simply a bit difficult to grasp.

Our first surprise came during the unboxing, as the relatively small, cylindrical-shaped battery and the great-looking tank revealed in front of our eyes. Both of these feature a simple but very elegant and reliable look while being quite lightweight. The stainless steel finish looks superb, is not much of a finger magnet, and is also relatively proof to scratches and dents. Both the battery and the tank has a diameter of 22mm, so these definitely look great together and sit flush one on another.

The tank in this kit, while definitely not huge in size, holds quite a serious amount of e-liquid, 5.5ml to be exact. The maintenance is easy – to replace the coil head or fill in your e-liquid, just flip the tank around and unscrew the base part of it. Also, you will always have a good idea about how much e-juice is left in this tank, as the Pyrex glass tube exposes almost the entire height of the tank. 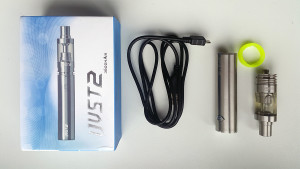 The iJust 2 is a great looking, solid, capacious and reliable battery for sub-ohm vaping. Aside the fact that it fires on an instant every single time, the charging process is also very convenient – thanks to the charging port located on the side, it can be easily charged while placed vertically. The bottom part of it is completely flat and quite wide in diameter, therefore there’s no need to worry about the device falling over.

No excessive buttons here, no adjustments of wattage or voltage are possible. The output voltage of the iJust 2 battery depends on the battery level; it gives out 4.2 volts when freshly charged. Still, the battery features short-circuit protection, low-voltage protection and overcharge protection, and sports a spring-loaded 510 connection.

With a very brief and quick push of the fire button, you can get your mouth (and perhaps face) full of vapor. The button has almost no delay at all, and that’s the great thing about it. It has a downside, though: it rattles. As both the battery and the button are made of stainless steel, the metallic, ‘clicky’ rattling is present almost always. Although it is not a deal-breaker, it might get on your nerves if you’re easily annoyed by unwanted sounds.

The fire button is illuminated by a LED light. This light turns on while charging and when the safety protection features are engaged. The tiny light, however, is not too bright, and while it does its job nicely in the dark, its close to invisible in direct sunlight.

While using this kit heavily and going through 8-12ml of e-liquid per day, a fully charged battery lasted us a whole day. 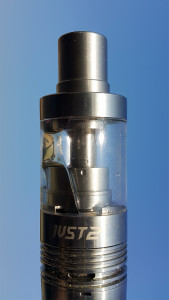 To make things clear, we will mainly take a look only on how the iJust 2 sub-ohm tank performs together with the iJust 2 battery here, as this is a starter kit review.

If you’re a beginner vaper, please keep in mind that this tank, like many other sub-ohm tanks, works best for direct lung inhales which differ from the traditional mouth-to-lung inhales when smoking a tobacco cigarette. This doesn’t mean that it will not work for you – you’ll simply need some time to get accustomed with the open draw and the wide-bore drip tip.

It provides a relatively cold vape – that’s the first thing we noticed with this tank, and we suppose that the innovative ‘heat dissipation’ fins of the atomizer base have something to do with this. For us, that’s a very good thing, as we’re tired of the boiling hot spit backs characteristic to quite a few sub-ohm tanks. At the same time, the vapor production with the standard 0.3 ohm coil is simply outstanding – we even think that the amount of clouds coming from the iJust 2 setup might be somewhat overwhelming for a beginner.

There is one thing about the tank that we didn’t like, though. And that’s the lack of airflow adjustment. Sure, you have the rubber ring in the kit, and, apart from the anti-slip function, it also does its job as an airflow controller. But the kit doesn’t look great with the ring on. The adjustment process with the ring is also not very straightforward, and some might even wonder where to put that thing on. It looks like a foreign body which shouldn’t be there.

However, the non-adjustable airflow on this tank provides a very open draw, and, thanks to the relatively low vapor temperature and the wide-bore drip tip, some enormous clouds can be produced. When fired using the iJust 2 battery, the tank doesn’t give a single burnt hit; we have never seen a leak, and the flavor is nice.

We also tried this tank with several different mods – with the Aspire Pegasus and the Asmodus Snow Wolf 200w. Eleaf states that the standard 0.3ohm iJust 2 organic cotton coils should be fired in the range of 30W–80W, and we found our sweet spot at around 45W. Turning it all the way up to 80W on the Snow Wolf gave us a very hot and unpleasant vape.

The iJust 2 tank is also compatible with many different coils, including Eleaf Melo, Aspire Atlantis, Atlantis 2, and Triton coils. 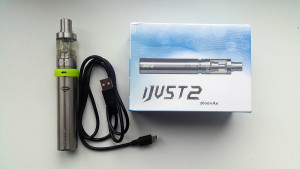 Despite the fact that this can be considered a simple sub-ohm vaping kit for beginners, it definitely leaves anyone who knows a thing or two about electronic cigarettes impressed. The shockingly low price tag of this kit can make you change your mind about your current eGo setup, and you certainly should, as the iJust 2 is a wonderful product for those who simply want to generate HEAPS of vapor without getting too much into technical stuff. The iJust 2 tank really is a godsend for cloud lovers who do not want to spend more than $20 for a sub-ohm tank – it works flawlessly, and the wide coil compatibility means less worrying about things you don’t need to worry about. Just fill the tank with your favorite e-liquid, push the fire button on the sleek and classy battery, and see the magic happen – it is just that simple with this starter kit.

Latest posts by S (see all)